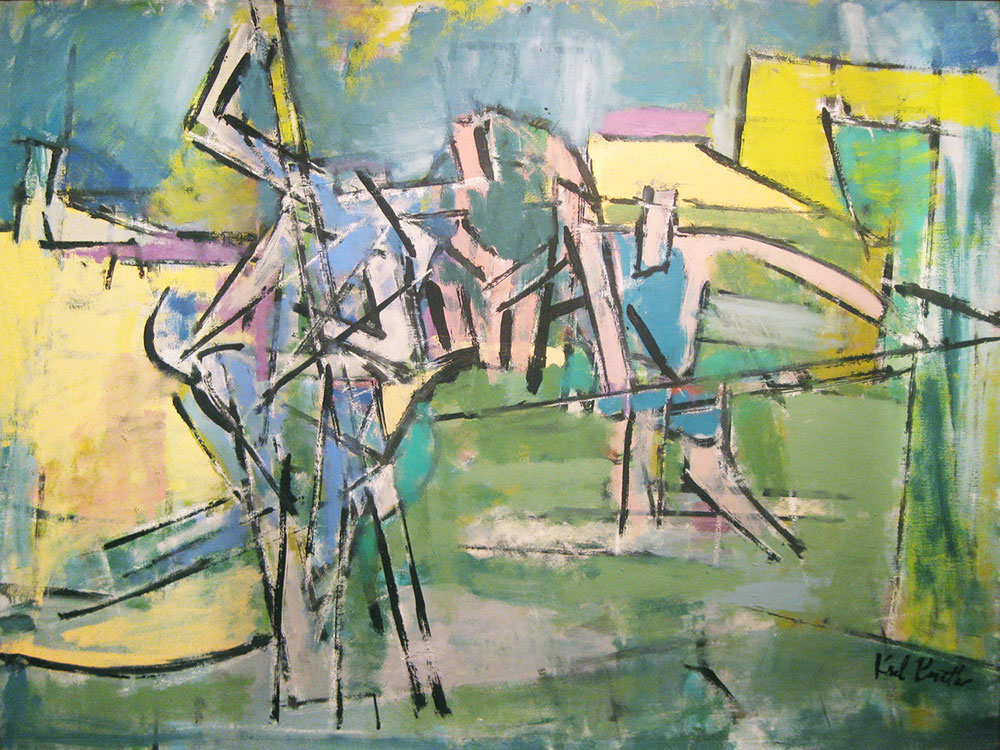 Painter, printmaker, and designer Karl Knaths was born Otto Karl Knaths in Eau Claire, Wisconsin, on October 21, 1891. After the death of his father when Karl was still a teenager, he was put in the position of supporting the family and took an internship with his uncle, a baker. A chance visit to his high school by author, Zona Gale, proved fortuitous as she encouraged the young Knaths to find the time to pursue art when he could, and upon his graduation, she encouraged him to take courses at the Dudley Crafts Watson school, where he remained until being offered an internship as a theater set designer for the Wisconsin Players the following year.

In 1911 he traveled to Chicago to enroll at the Art Institute. To support himself, he worked there as a janitor’s assistant. Two years into his time at the school the 1913 Armory Show, which started in New York and traveled to Chicago and Boston, arrived in town, and he took a job as a guard at the event. This proved to be a turning point in Knaths’ artistic path as it was the first time he was exposed to European Modernism. As with many artists and art enthusiasts of the time, the works in Fauvism, Cubism, and Futurism were a mix of confusion, astonishment, and inspiration, and he credits the work of Cezanne with opening the doors to a new way of using color and line.

Knaths’ would eventually relocate to Provincetown, following more time with the Wisconsin Players and a two-year military stint. In 1919 he formally set up a studio in the town that was famous for its attraction to artists, and he soon met the Weinrich sisters who had founded the Provincetown Printers. Through this connection he learned the art of woodblock printmaking and was able to form the bold painting style for which he would become known.

In addition to his work as an artist, he developed his own theory regarding style and execution and became a proponent for more naturalistic approaches, writing and teaching about the connection between visual, aural, and written arts. Of note was his observation on schools of style and the paths to learning various techniques: “Systems are only bricks and lumber — of themselves they cannot encompass the immeasurable spiritual qualities that go into a successful picture. The unlooked-for things that happen in the process of work are the important ones.” (Goodrich, Llyod; Howe, John Ireland, 1959: Four American Expressionists: Doris Ceasar, Chaim Gross, Karl Knaths, Abraham Rattner. Whitney Museum of American Art.) His work would eventually begin to explore a more angular, almost Cubist aesthetic, a style he had originally felt intimidated by when observing the works of Picasso at the Armory show.

Knaths was also a noted educator and he taught at Bennington College, Black Mountain College, the Skowhegan School of Painting, and was employed as both a muralist and instructor with the WPA’s Federal Art Program. He was also a guest lecturer at various times between 1938 and 1950 at the Phillips Gallery Art School. He first major solo exhibition took place at the Paul Rosenberg Gallery in 1947, and in 1950 he won first prize in the “American Painting Today” competition by the Metropolitan Museum.

As the rise of Abstract Expressionism began to eclipse other genres in the American art scene, Knaths’ work was seen less as that of innovation and more as a product of an older and more conservative outlook – not an uncommon happenstance for any popular artist. However, despite this setback, Knaths continued to work and to exhibit, and his paintings and prints proved to be widely sought after until his death in 1971 and beyond. Today, Knaths is viewed as a major figure in American Modernism.